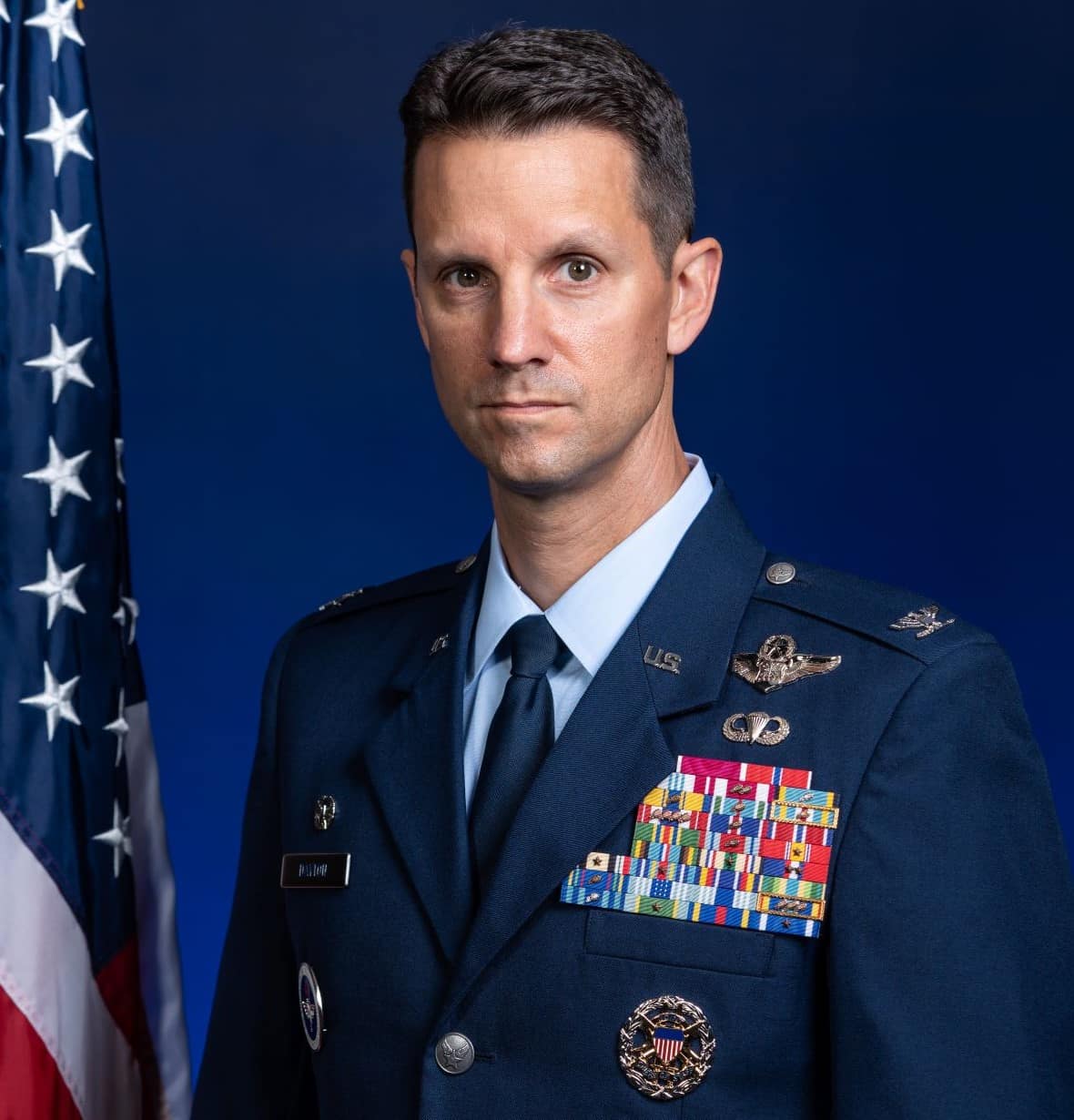 END_OF_DOCUMENT_TOKEN_TO_BE_REPLACED

Col Alan Dayton serves as the Commander and Professor of Aerospace Studies of the Air Force Reserve Officer Training Corps, Detachment 157 for Embry-Riddle Aeronautical University, Bethune-Cookman University, Daytona State College, Stetson University and the University of Central Florida – Daytona Beach Campus. Colonel Dayton is responsible to the Universities and AFROTC for recruiting, training, and educating Air Force officer candidates. He instructs courses in leadership, national security, and air power history. He is responsible for who is accepted, trained, and ultimately commissioned as Second Lieutenants in the United States Air Force and Space Force.

Col Dayton is a distinguished graduate of AFROTC at N.C. State University. He has multiple operational deployments, flying combat and combat support missions in Kosovo, Afghanistan, and Iraq. He served as an undergraduate navigator training instructor and an Air Force Presidential Advance Agent. He also served as the command electronic warfare officer for both III Corps Artillery and II Marine Expeditionary Force in Iraq. Following an Air Officer Commanding tour at the U.S. Air Force Academy, he commanded the 82d Reconnaissance Squadron employing reconnaissance aircraft throughout the Pacific Theater.

Col Dayton served in a variety of staff assignments, to include the Joint Staff and Air Combat Command, and deployed as the Joint Air Component Coordination Element for Operation INHERENT RESOLVE. Prior to his current position, he commanded the 55th Mission Support Group where he led over 1,670 personnel supporting 7.5M square feet of facilities valued at $9 billion dollars.

The group provided mobility processing to over 3,000 deployed personnel per year and services to 57,000 active duty, dependent and retired personnel. 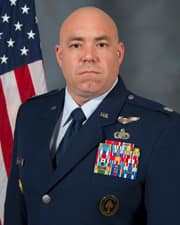 END_OF_DOCUMENT_TOKEN_TO_BE_REPLACED

Lieutenant Colonel Hollingsworth graduated from Embry-Riddle Aeronautical University in 2001 with a Bachelor’s of Science in Aeronautical Science. He was commissioned in 2002 from the Air Force’s Officer Training School. His career includes a variety of duties spanning conventional and strategic operations, intelligence collection, exploitation and dissemination, squadron level flying operations and Special Operations. His deployments include participation in Operations Iraqi Freedom and Enduring Freedom as well as twelve contingency special operations across the Middle East and North Africa. Prior to his current position, Lieutenant Colonel Hollingsworth was the Director of Intelligence for the National Airborne Operations Center, supporting the Department of Defense’s most survivable Military Command and Control Center for strategic forces.

Lieutenant Colonel Hollingsworth is a Non-rated Aircrew Member with nearly 800 flight hours on the E-4B aircraft. 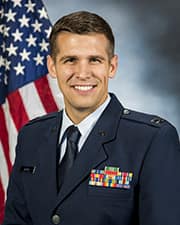 END_OF_DOCUMENT_TOKEN_TO_BE_REPLACED

Capt Joseph A. Dixon is the Assistant Professor of Aerospace Studies, DET 157, Embry-Riddle Aeronautical University, Florida.  He is part of team responsible for organizing, training, and commissioning a detachment of 450+ AFROTC cadets. His primary responsibility is training the incoming class of 200+ freshmen cadets.

Capt Dixon received his commission from Army ROTC at the Florida Institute of Technology in Melbourne, Florida in 2009. He started his military career as a Route Clearance Platoon Leader, preparing 30 combat engineers for IED defeat missions. He later served in the 604th Forward Engineer Support Team-Advanced (FEST-A), providing technical engineering expertise for multiple missions in Korea and Iraq. While in the reserves, Capt Dixon also worked full-time as a civilian aerospace engineer. His first 7 years of civilian employment were with a defense contractor that performed research for the DoD in turbomachinery, materials science, thermal control, and energy conversion. Before entering active service with the Air Force, Capt Dixon spent 2 years operating an engineering consulting business. 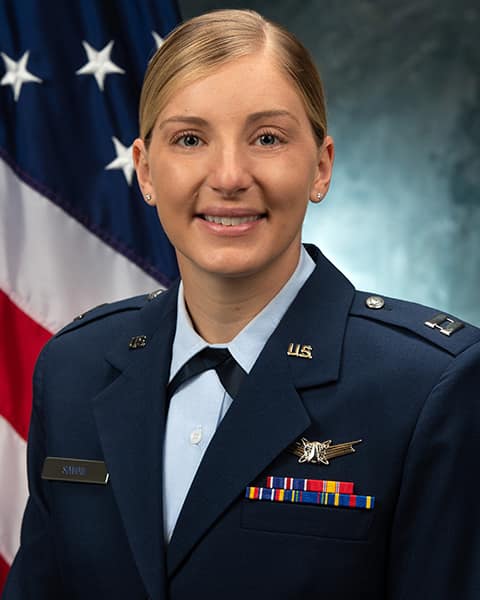 END_OF_DOCUMENT_TOKEN_TO_BE_REPLACED

Capt Ashley N. Savoie serves as the Assistant Operations Officer for Air Force Reserve Officer Training Corps (AFROTC) Detachment 157, Embry Riddle Aeronautical University, Daytona Beach, FL. In this capacity, she directs one of the largest detachments in the country that produces the most officers of any AFROTC unit.  Additionally, she leads, instructs, and evaluates prospective Air Force and Space Force officers in both classroom instruction and practical application exercises.

Capt Savoie commissioned into the Air Force through AFROTC in December 2013.  She became a certified Satellite Vehicle Operator for the Global Positioning System with in the 2nd Space Operations Squadron after completing Undergraduate Space Training in January 2015.  Due to her expertise, she was selected to go on and instruct and evaluate future Satellite Vehicle Operators. Intermingled with her operator, instructor, and evaluator time, Capt Savoie was an Executive Officer at the squadron and group level. She was then hand selected as the Test Director for the Operational Test Team, where she led an emerging new program.  Prior to her current position, Capt Savoie was the Branch Chief, Combat Support Division, 750th Operations Support Squadron, Space Delta 9, Schriever AFB, Colo. 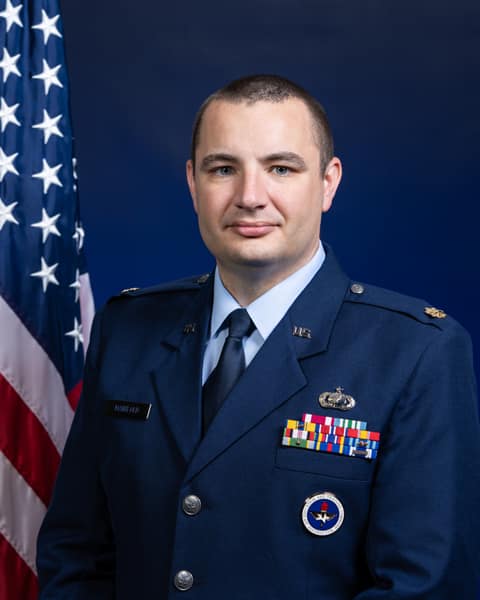 END_OF_DOCUMENT_TOKEN_TO_BE_REPLACED

Major Robert Manifold is currently the Operations Officer at Detachment 157, Embry-Riddle Aeronautical University, and Assistant Professor of Aerospace Studies. Prior to his current assignment, Major Manifold served as the Lead Program Manager for all RQ-4 Global Hawk classified acquisition programs. While there, Major Manifold was responsible for leading a 40-member geographically dispersed team to design, integrate, test, and field over $200M of classified equipment across multiple efforts. 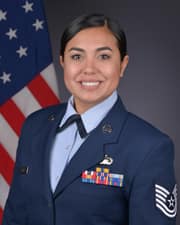 END_OF_DOCUMENT_TOKEN_TO_BE_REPLACED

TSgt Harris entered active duty in July of 2011 as a Customer Service Apprentice. Her first duty assignment was at Offutt Air Force Base, Nebraska. She worked as an Installation Personnel Readiness Journeyman, at the 55th Force Support Squadron where she was promoted Below The Zone. She later was hand-selected to manage ACC’s largest Personnel Reliability Assessment Program base as the Installation “PRAP” Monitor, where she was lauded for obtaining a number one PAR Report rating for her program. In 2016, TSgt Harris was assigned to the United States Air Force Special Investigations Academy, where she was the sole personnel manager for OSI’s only training enterprise. Her dedication and expertise contributed to the 2019 National Counterintelligence and Security Professionals Education and Training Team of the Year Award. 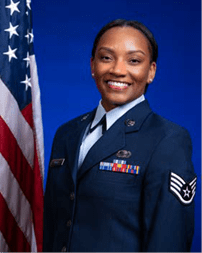 END_OF_DOCUMENT_TOKEN_TO_BE_REPLACED

SSgt  Woods entered active duty in November of  2014 in the Personnel  career  field, as a Customer Service Apprentice. Upon completion of basic  military  training, she went on  to  technical training at Keesler AFB, MS in August of 2015.  As a personnelist, her background includes various personnel duties throughout the Career Development and Force Management section working at both the base level and Headquarters Air Force level. Her assignment locations include Andrews AFB, MD, Quantico, VA, and Daytona Beach, FL. 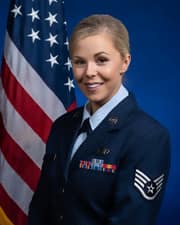 END_OF_DOCUMENT_TOKEN_TO_BE_REPLACED

SSgt Paige Welch, who hails from New Lexington, OH, graduated from Tri-County Career Center in 2012 with her Cosmetology license. She entered the Air Force in August of 2014 into the Personnel career field as a Commander Support Staff Technician at the National Air and Space Intelligent Center, Wright-Patterson Air Force Base, OH. She led a myriad of high-level NASIC programs, supporting over 3,100 military and civilian personnel. Her dedication to the mission earned her the distinction of Airman of the second quarter for 2016. Then in January 2017, SSgt Welch was hand selected for a permanent change of assignment to the 88th Air Base Wing, Force Support Squadron. As a Force Management Technician and Retention Supervisor she contributed to the Commander’s Top Large Military Personnel Flight in 2017 and the 2018 Large Team Award for the Third quarter. Later, her demonstration of leadership and team comradery in Airman Leadership School led to her selection as the Commandant Leadership award in 2018. 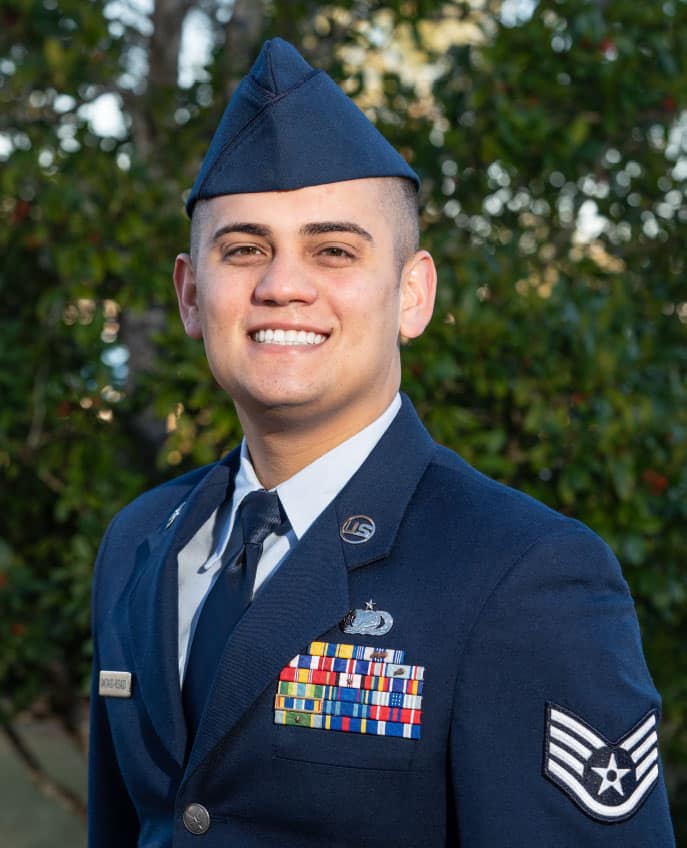 END_OF_DOCUMENT_TOKEN_TO_BE_REPLACED

SSgt Santiago entered active duty in November of 2014 as a Postal Specialist at Incirlik Air Base, Turkey. During this assignment, SSgt Santiago was key to postal operations success, delivering 7,600 mail items to Airmen ensuring continuous customer service. While stationed at Joint Base Charleston, SC in 2019, SSgt Santiago served as a WIT member and was instrumental to inspecting 74 inspection items. He also was hand-selected to be an safety investigation recorder for a KC-135R aircraft mishap where he created a secure shared-drive for investigators while scrutinizing 70 non-disclosure agreements and transcribing eight interviews from audio to text format, and as a collective result, he achieved the distinguished honor of winning Airmen of the Year for the 437th Airlift Wing! After his tour in South Carolina, SSgt Santiago PCS’d to F. E. Warren AFB in Wyoming.  During this time, he was charged with being the Non-Commissioned Officer in Charge of the Commander’s Support Staff, ensuring compliance and excellence with all commander’s programs. 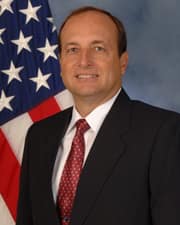 END_OF_DOCUMENT_TOKEN_TO_BE_REPLACED

Mr. Kelly Fletcher currently instructs Air Force Reserve Officer Training Corps courses.  He has a wealth of experience in the Department of Defense.  As a senior civilian he performed duties as the Chief of Staff, Defense POW/MIA Accounting Agency, in Hawaii and Washington D.C. As an Air Force Airman, he served 34 years in the United States Air Force, retiring with the rank of Colonel.  Kelly’s career covered time as an Non-Commissioned Officer, Instructor Defensive Aerial Gunner on the B-52H, and as an Air Force Officer and Pilot in a variety of flying assignments as an Instructor, Evaluator, Flight Commander, and Operations Officer in the T-6, T-37, T-38, and F-15 aircraft and commanded at the squadron and group level. He held numerous staff positions at Air Force Personnel Center, Air Education and Training Command, Air Combat Command, and Pacific Air Forces.  He is a command pilot with more than 4,500 flying hours.  Kelly received a Bachelor of Science degree in Business Administration from National College, Rapid City, South Dakota.  A Masters of Science in Community Services from Michigan State University, East Lansing, Michigan and a Masters of Arts in Strategic Studies from Air University, Maxwell Air Force Base, Alabama.  He is a graduate of the Air Force Air War College and the Army Command and General Staff College.

The appearance of hyperlinks does not constitute endorsement by the U.S. Air Force or the information, products, or services contained therein. For other than authorized activities such as military exchanges and morale, welfare and recreation sites, the U.S. Air Force does not exercise any editorial control over the information you may find at these locations. Such links provided are consistent with the stated purpose of this DOD Web site.

This Official U.S. Government Internet site is provided as a public service by Air Force ROTC and the IT department at Embry-Riddle Aeronautical University. It is intended for use by the public for viewing and retrieving information only. Unauthorized attempts to upload information or change information on this service are strictly prohibited and are punishable under the rules of this university, the Computer Fraud and Abuse Act of 1986, and other state and federal laws. Unless otherwise indicated, all information is public information and is available to copy or distribute. Use of this system constitutes consent to security testing and monitoring. The views expressed in educational research, studies, analysis, or commentary are those of the author and do not reflect the official policy or position of the U.S. Air Force, Department Of Defense, U.S. Government, or this educational institution.