END_OF_DOCUMENT_TOKEN_TO_BE_REPLACED

In this special College of Engineering publication, we focus on the emerging industry of urban air mobility (UAM) — on-demand, short range air travel over an urban area.

Flying autonomous vehicles have been on the ascending side of Gartner’s Hype Cycle for the past two years, according to the organization’s emerging technology trends. However, for UAM to fully realize its promise, it requires the confluence of autonomy and other enabling technologies — including high-energy density and quiet electrified propulsion. In order to become commercially viable, a supportive ground infrastructure must be developed. The technology must also achieve extreme operational reliability to satisfy regulatory requirements and gain public acceptance. In this publication you will find insightful perspectives on all aspects of UAM by Embry-Riddle’s experts and pioneers, who, through their research, are shaping the direction of this potentially disruptive technology. 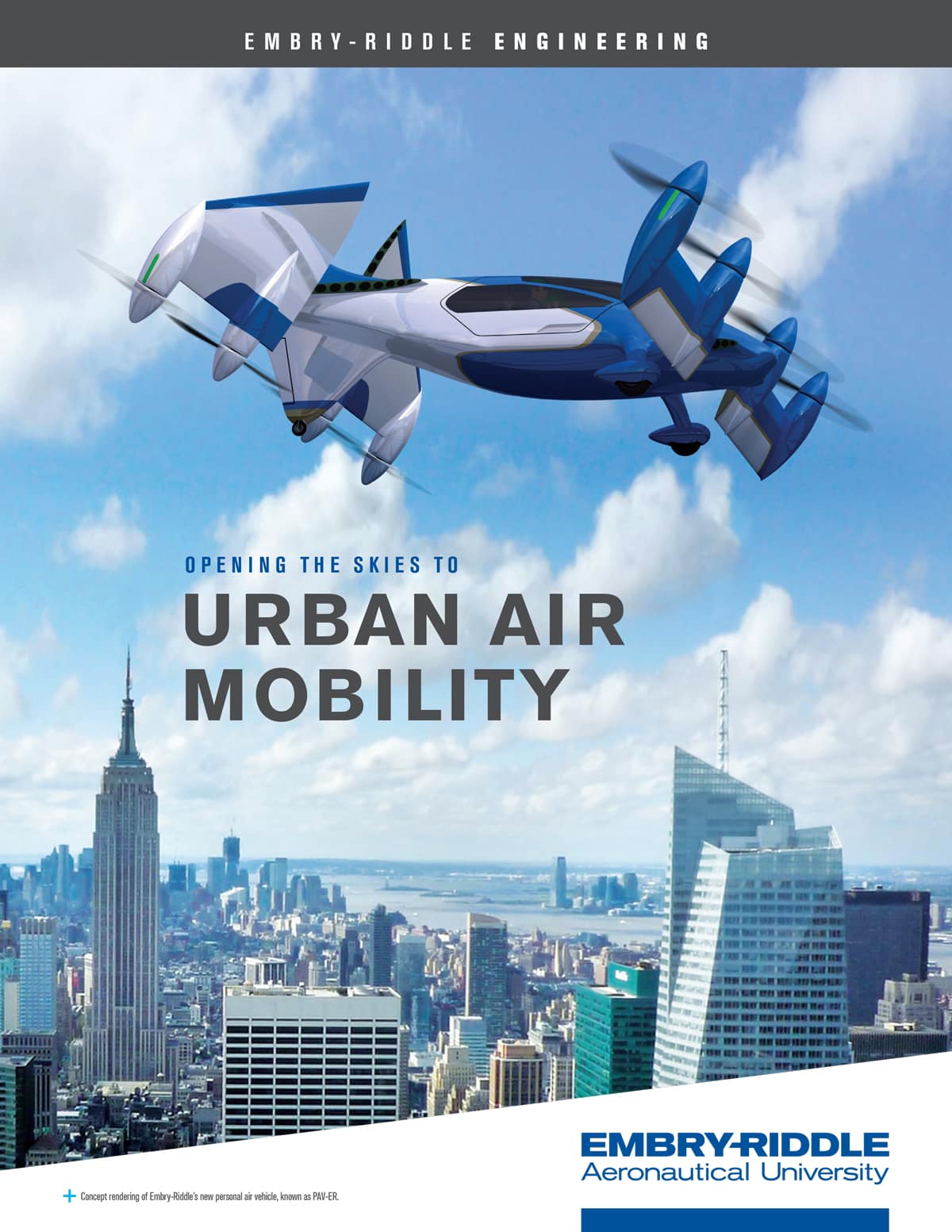 As a leading aerospace and aviation institution, Embry-Riddle plays a central role in the rapidly growing industry’s R&D through its Eagle Flight Research Center.

A natural synergy occurs between the center and the cluster of innovative UAM startups in the university’s Research Park, such as VerdeGo Aero, Flight Level Engineering and Aerial Applications.

Our expertise in UAM is a decade in the making. The NASA Green Flight Challenge we entered in 2011 required flying an aircraft for 200 miles from takeoff to landing on the energy equivalent of one gallon of gasoline. We selected a hybrid electric architecture for the power plant installed on one of the most aerodynamically efficient airframes — a Stemme S-10 — instead of going for a fully electric vehicle. Ten years hence, batteries aren’t nearly where people were hoping they would be in supplying sufficient energy density to power a flying vehicle for any practical range and speed. Hybrid-electric proved to be the power plant of choice for researchers and has inspired a new hybrid electric power plant project at Embry-Riddle that possesses nearly five times the energy density of a similar battery-powered system.

In the years since the competition, we also developed an electrically powered technology demonstrator, which uses novel control algorithms and propeller mechanisms to transition between flight regimes. This trailblazing patented technology is certain to open the door for more widespread use of vertical take-off and landing (VTOL) vehicles and usher a new era in UAM.

Innovation is often balanced with advocacy work for airworthiness standards and certification updates. Thanks to our efforts, the General Aviation Manufacturers Association — a highly influential global trade organization — established a committee on Electric Propulsion, which is chaired by Professor Richard “Pat” Anderson. We also established a university-led Hybrid Electric Research Consortium to study the technology’s potential and challenges with our growing membership, inclusive of Airbus and Argonne National Laboratory, to name a few.

These investments empower Embry-Riddle to continue pushing the envelope on autonomy and eVTOL technology, both critical for the realization of UAM. I hope you enjoy reading about the advancements we have made in this emerging industry.