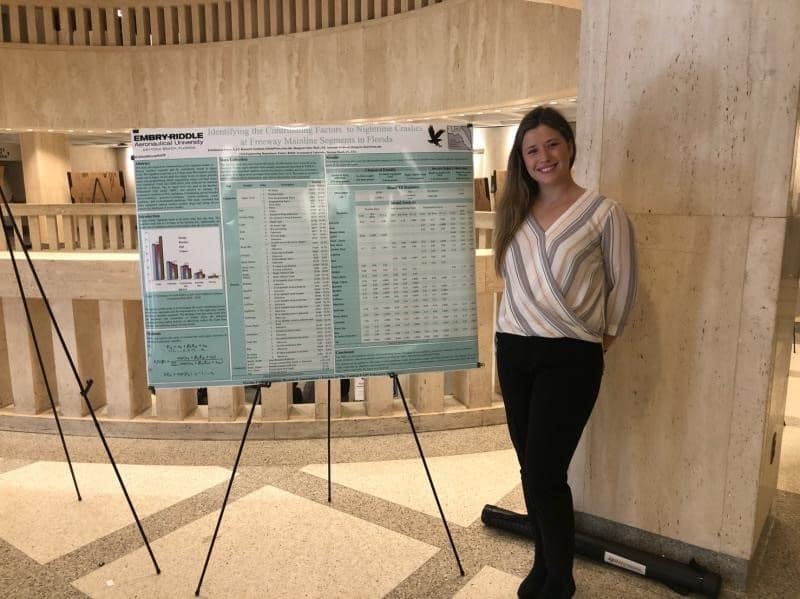 How has undergraduate research impacted your life?

Undergraduate research has created so many opportunities for me I never thought I had. It has broadened my network and opened doors for me in my field of engineering that would have been hard to access in other ways. Undergraduate research gave me responsibilities and exposed me to work that are career oriented and a step further than just completing a college degree. Participating early in research made me realize how much I enjoy it, and made me decide to pursue a master’s degree in Civil Engineering. A big decision that will influence my life and my future career.

What does research mean to you?

Research is a way to discover and reveal the reality we live in. It investigates the core of society and its mysteries. As an engineering student, problem solving and analyzing is something I have always enjoyed, but with research, I get a true answer and completion of my work. Even if it sometimes feels like answering one question opens up 10 new ones, but that is also what makes it so interesting. There is so many things to discover, and I am the one who does it.

Describe some of the projects you have worked on

This study investigated the characteristics of the nighttime crashes at freeway mainline segments and the contributing factors to injury levels. The nighttime crash rate is 1.6 times more than daytime and the fatality rate is higher. In this study five injury levels, no injury, possible injury, non-incapacitating injury, capacitating injury, and fatal injury, were considered. Crash data (2005-2010) were collected for interstate highways in Florida. The no injury level was used as the baseline. Multinomial logit model (MNL) was selected to estimate the explanatory variables at 95% confidence. Contributing factors included driver-conditions, geometric-conditions, vehicle-conditions, crash-conditions, and environmental-conditions. This study concluded that safety equipment reduces crashes, alcohol, drugs and young drivers increase the likelihood of severe crashes.

The National Science Foundation’s definition of resiliency is “the ability to prepare and plan for, absorb, recover from, or more successfully adapt to actual or potential adverse events” (National Science Foundation). While this definition is informative and useful, it lacks a quantitative reference. There is a need for a method of quantifying resilience to better plan and prepare for system wide disruptions. The research effort described here provides a quantifiable measures of system resiliency, consistent with NSF’s definition. Fundamentally, a system disruption can be partitioned into five distinctive states: the stable pre-event state, the absorption state, the disrupted state, the recovered state, and stable recovered state. The proposed method identifies these states by measuring system output and quantifies each component on a value scale between zero and one. The resiliency measure then unifies these metrics to provide an overall assessment of resiliency, which accounts for the system’s ability to absorb, recover, and adapt.

This approach to quantifying resiliency is applicable to any real-world or simulated system with measurable outputs. This paper first documents the development of the resiliency quantification method and then applies the method toward four complex, real world, transportation systems undergoing disruptions. These case studies consisted of six maritime port, three airports, two localized refueling systems, and the Colorado Department of Transportation’s cyber network. Each system had a measurable drop in functionality due to a disruption. In general, the results of this research showed that the proposed method of quantifying resiliency can be utilized for any transportation system.

Mass evacuations, particularly those at a statewide level, represent the largest single-event traffic movements that exist. These complex events can last several days, cover thousands of miles of roadway, and include hundreds of thousands of people and vehicles. Often, they are marked by enormous delays and heavy congestion and are nearly always criticized for their inefficiency and lack of management. However, there are no standardized methods by which to systematically quantify traffic characteristics at the proper scale. Several recent evacuations have occurred in the United States. Wildfire evacuations have been ordered in the state of California while Hurricanes have led to evacuations in the state of Florida. It has generally been accepted that the evacuation from a regional wildfire is fundamentally different than the evacuation from a hurricane. Hurricane evacuations generally encompass larger areas when compared to wildfire evacuations and provide several days of advanced warning. Whereas, wildfires impact smaller areas with significantly shorter warning time. On the other hand, at the broadest level, evacuees and their vehicles move in both time and space. This research seeks to develop a better understanding of the travel flow principles that govern the evacuation process and its impact on the mobility of a community, for different hazard types. The goal of this research is to build upon the prior knowledge and expand the scientific understanding of the evacuation process by systematically analyzing evacuations from hurricane and wildfire events.