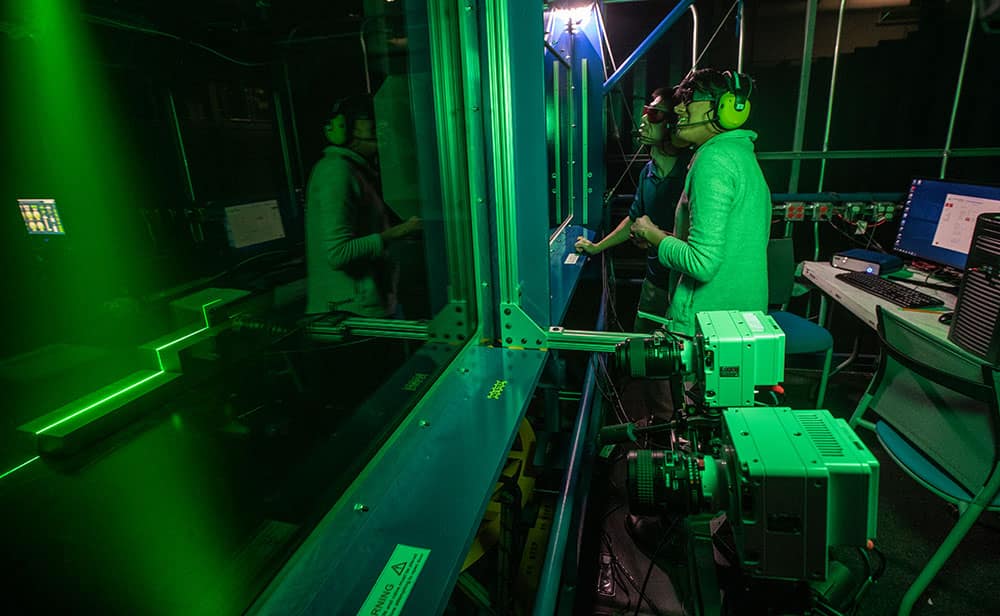 The recently constructed $10 million state-of-the-art, low-speed tunnel is housed in a dedicated 14,000-square-foot building. It features a 4-by-6 foot primary test section and can deliver a maximum flow speed of up to 420 ft/s. The primary test section is also 12-foot long, and gives the tunnel considerable flexibility for making measurements on a diverse range of test articles.

The test section has almost unimpeded optical access for particle image velocimetry (PIV) measurements — this being a primary design requirement—and much of the test section is comprised of optical quality glass with anti-reflective surface coatings. Various working and support platforms have been integrated into the design of the test section to allow maximum flexibility for mounting cameras, lasers and other optics. The test section is also equipped with a research quality, six-component, remotely controlled pitch-and-yaw force balance. 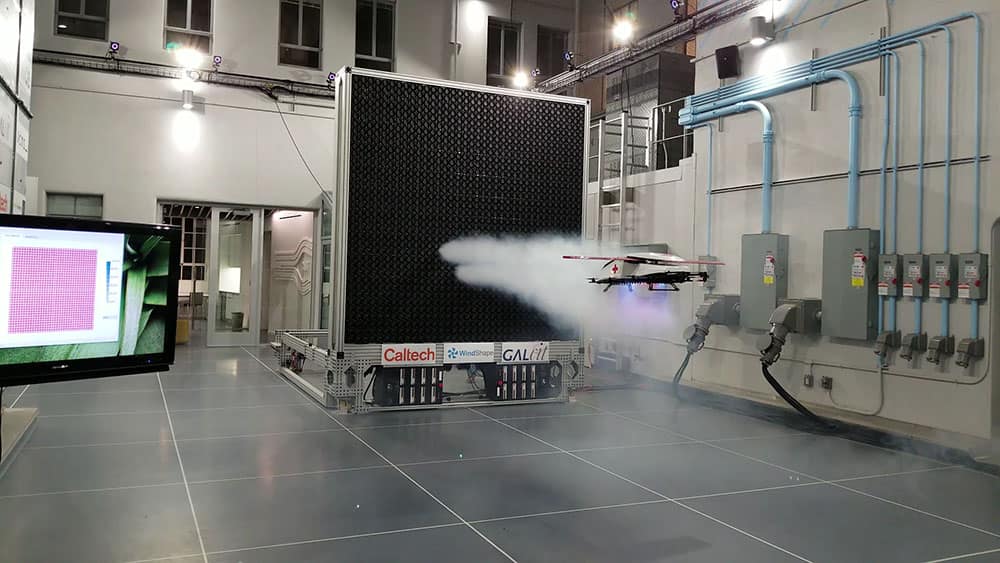 The specific research program at Caltech’s Center for Autonomous Systems and Technologies (CAST) is aimed at long-term autonomy and large-scale, realistic operation of eVTOL air vehicles with conventional wings for longer flight ranges that can handle various uncertain weather and traffic conditions in real-time. We call such a research approach physics-infused safe autonomy where the physics of vehicle dynamics, aerodynamics, and practical hardware limitations play a critical role in the research problem setting.

CAST’s goal is to synergistically integrate state-of-the-art tools in nonlinear dynamics and control theory, machine learning and artificial intelligence (AI), and aerodynamics with CAST’s domain knowledge in autonomous air vehicles to solve specific research challenges relevant to fully-autonomous fixed-wing eVTOL aircraft operating in realistic scenarios. In pursuit of this vision, CAST’s engineers have developed multiple working models of their eVTOL aircraft with fixed wings based on innovative design ideas, including a hybrid bio-inspired approach of distributed fans and deployable wings. The models and autonomy algorithms have been flight-tested successfully in CAST’s unique flight arena using an open-air fan-array wind tunnel. 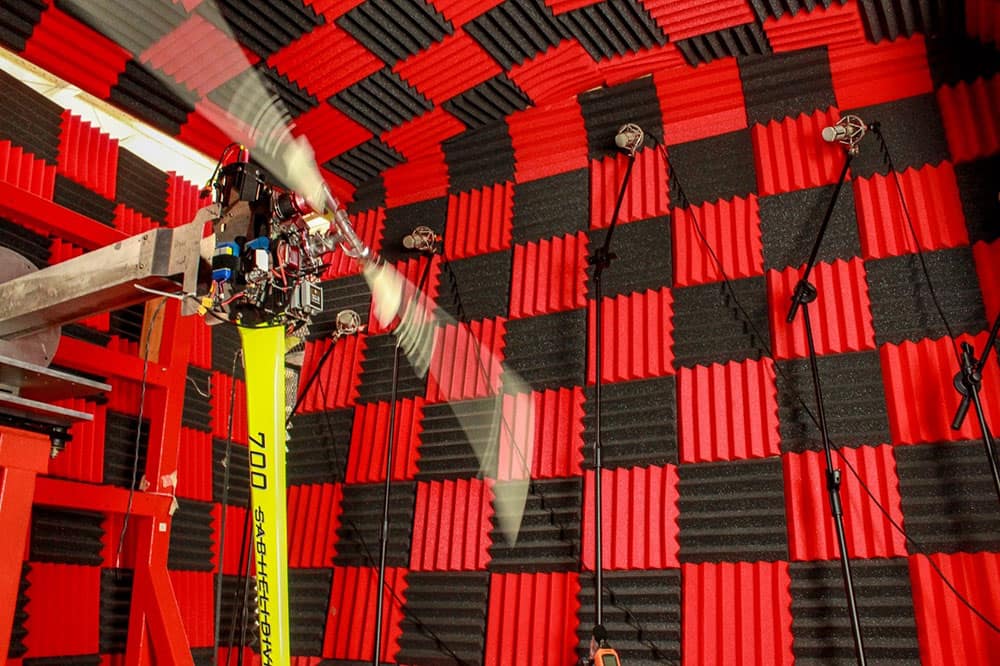 An anechoic chamber is available in the Eagle Flight Research Center (EFRC) to test small rotors like those on the Personal Air Vehicle at Embry Riddle (PAVER) research prototype. It is well known that the noise due to propulsion is directly related to the propeller tip Mach number. To the first order effect, a lower Mach number means a quieter vehicle. For eVTOL that comes at the cost of propulsive efficiency.

Prop-rotors that utilize electric motors for rotational power have the ability to operate at many different RPM and collective pitch settings, while providing the same thrust level. Lower RPM settings will in general produce less noise, but this will come at the cost of operating the system less efficiently from an energy usage standpoint. Anechoic chambers can be used to map the noise versus efficiency trade-offs with actual hardware. 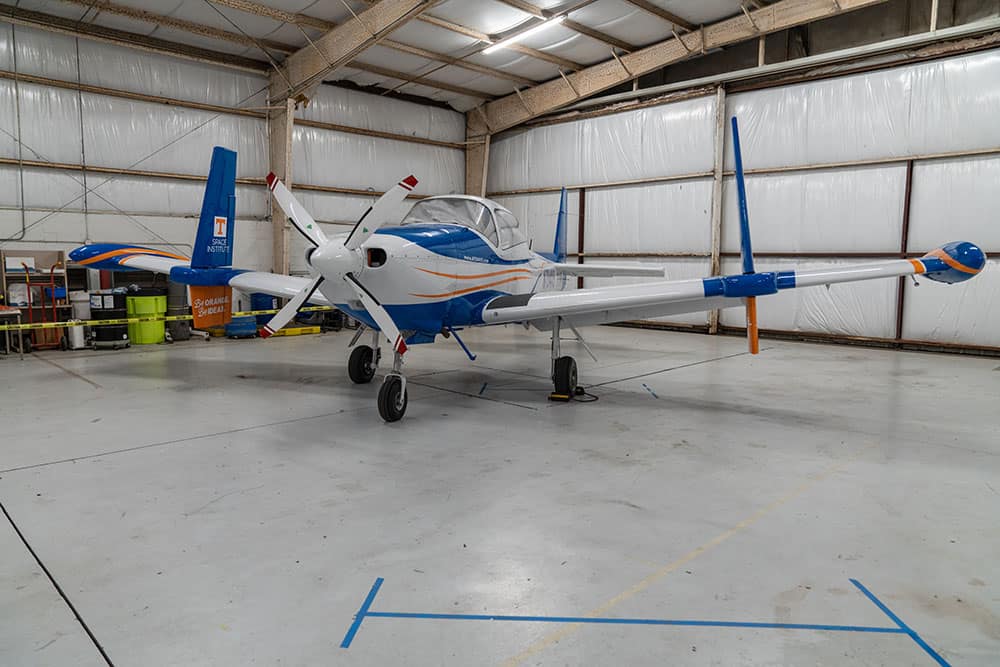 Flight Level Engineering operates two Ryan Navion based in-flight simulators, also known as variable stability or variable response aircraft which expose pilots and engineers to different aircraft flying characteristics and flight control systems. These in-flight simulation aircraft were originally developed by Princeton University under contract by the Naval Air Systems Command and NASA. Since then, they have safely participated in the development of modern control law applications and provided education opportunities for test pilots and engineers.

The Eagle Flight Research Center has three DC electronic loads manufactured by Magna-Power. These loads are programmable and can be utilized to place a time history of power load of arbitrary shape on a power providing system such as a battery, generator, or hybrid-electric powerplant.

The lab has successfully used this load in the following case study. A simulation model of a 900 pound VTOL UAV was flown through an arbitrary mission at various levels of turbulence. The power profile generated in this simulation was then programmed into the electronic load and that load was then placed on the serial-hybrid powerplant. 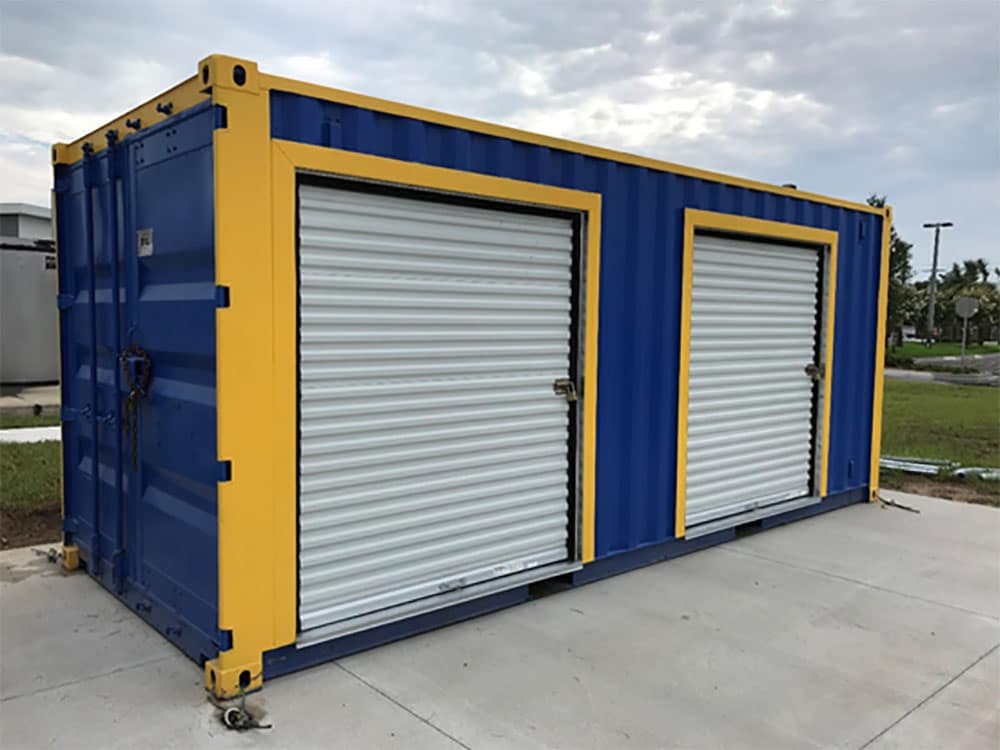 High performance hybrid aircraft development requires high performance batteries tested to the edge of their performance envelope. To support this important aspect of our work, the Eagle Flight Research Center at Embry-Riddle has procured a custom modified fireproof battery test enclosure for testing batteries to their maximum—and beyond if needed. This climate controlled and fireproof lined metal test outbuilding is suitable for cell- and module-level testing.

Current equipment includes multiple power supplies with a range of high voltage and high current capabilities and an Arbin module-level battery tester based on their LBT 21024 platform for precise and repeatable programmable battery testing.  Coupled with our FS Bondtec ultrasonic wire bonder, modules created at Embry-Riddle can be tested to confirm performance and validated for reliable and safe operation.