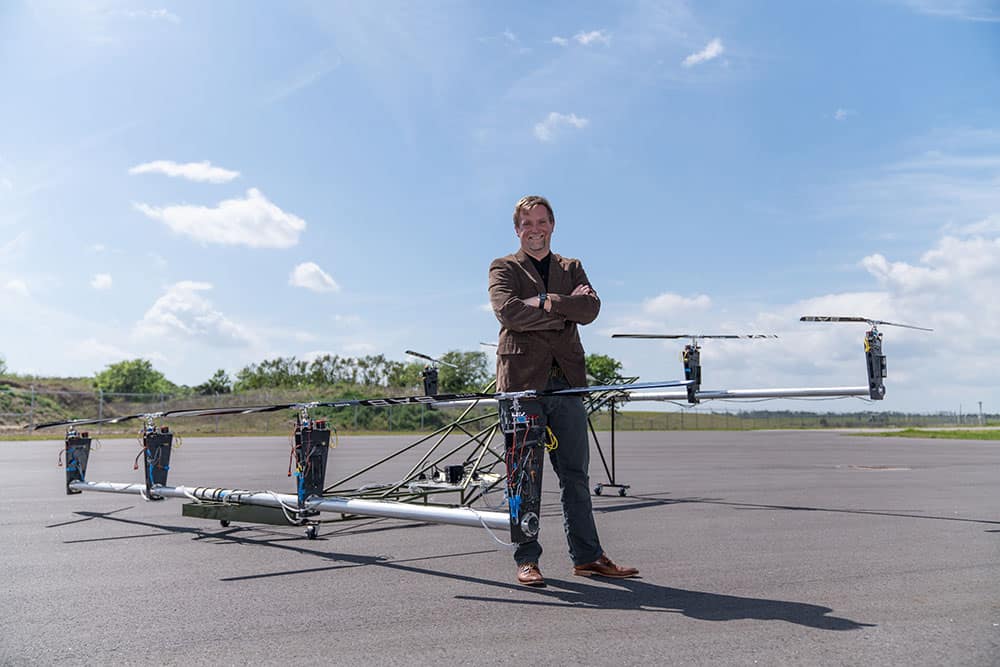 The PAVER is a research prototype of a concept that utilizes 8 electric propulsion pods on a dual-tilt wing platform. The concept envisions propellers on the rear wing as pushers that tilt down for vertical flight, while the propellers on the canard are tractors, tilting up for VTOL mode. Each pod utilizes full helicopter swash-plate controls, giving the ability to control thrust and control moments at each pod without changing RPM. 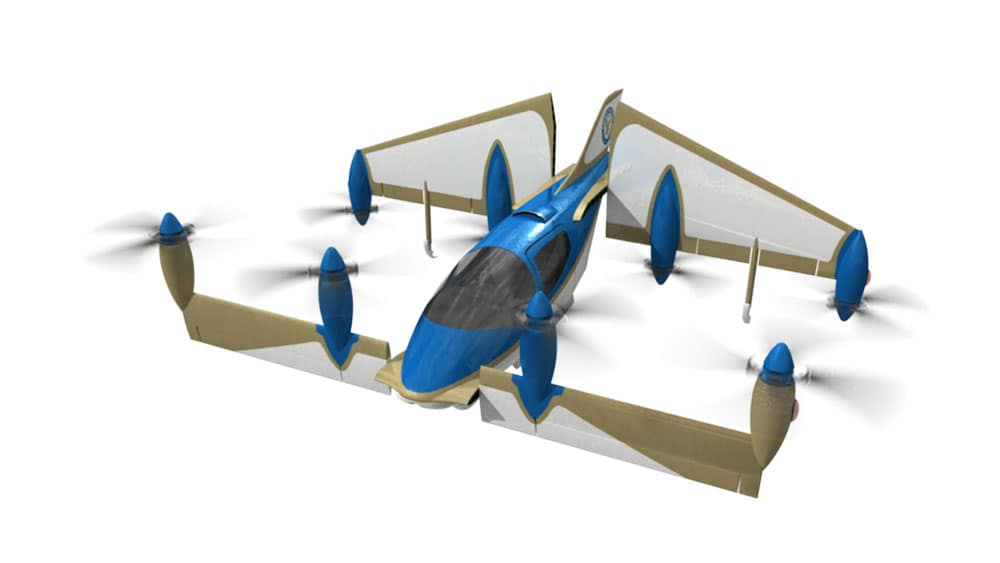 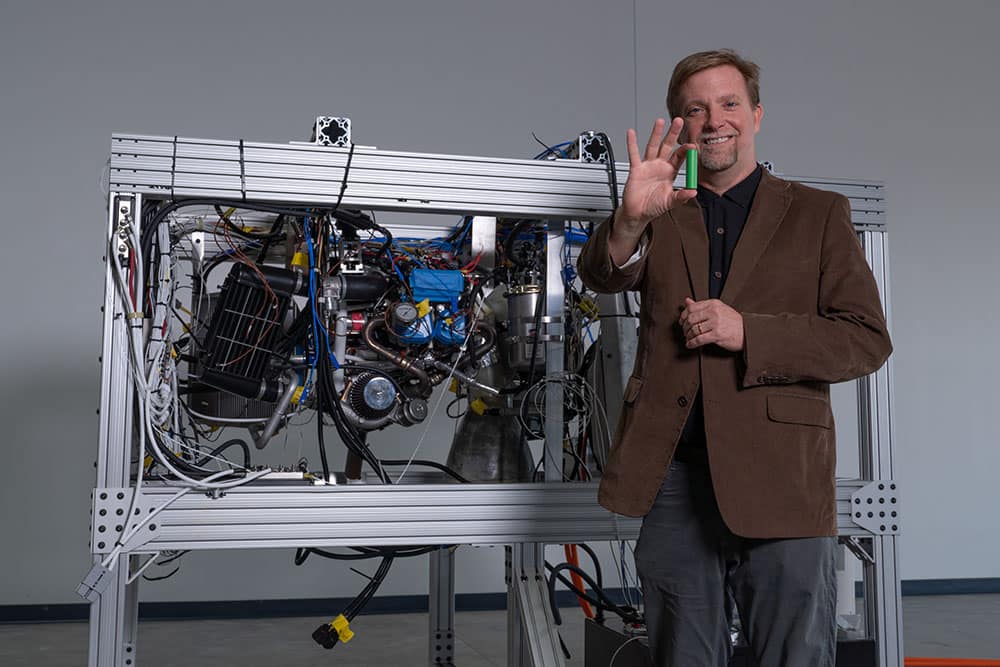 The serial hybrid powerplant is the best answer to the problem – “batteries are too heavy.”  This system converts gasoline or diesel fuel to electricity with 5 – 6 times higher energy density than today’s best batteries. In addition to the powerplant, our testing system includes a high power programmable load. This load can replay power profiles so the powerplant’s control system can try to meet the demand requested. Examination of the data can determine which parts of the load profile were met by the generator and which parts were met by the battery pack.

This model uses a turbocharged, all-aluminum certified airplane engine burning gasoline and feeds all crankshaft power into a highly efficient generator to output DC current at 420 volts. The system also includes a 420 volt battery pack that also supplies power to the bus. Together, the system can output power at the high-frequency needed or a typical multi-coper eVTOL flying in turbulent conditions. With instrumentation expected in a research setting, our understanding of the thermal, electrical and mechanical systems is unmatched. 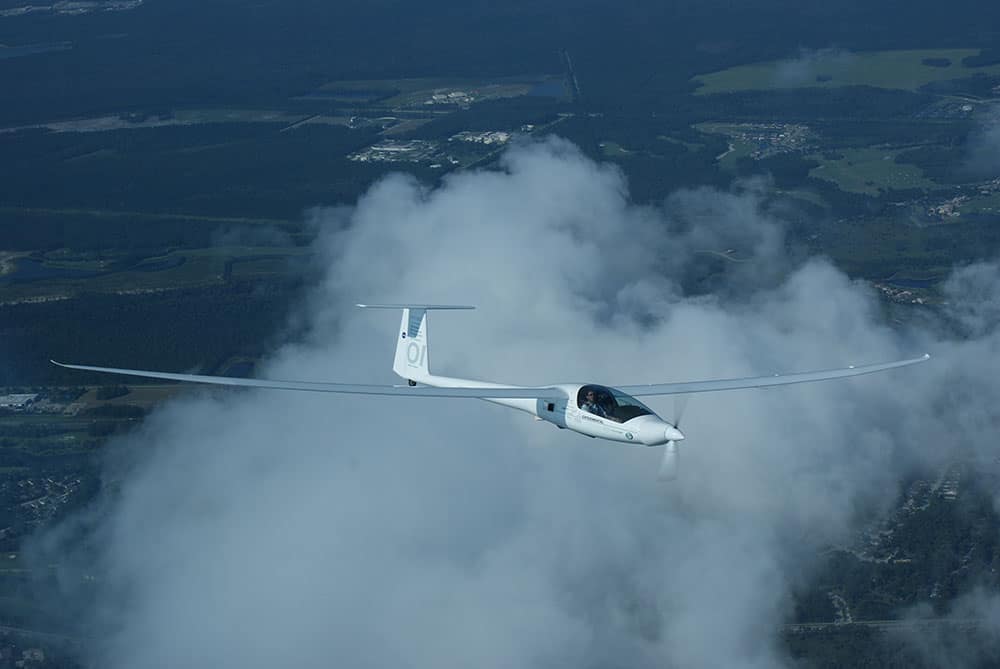 The Eco Eagle is the world’s first parallel direct-drive hybrid aircraft. Engineered by Embry-Riddle, the unique aircraft also served as the university’s entry into the Green Flight Challenge, a competition sponsored by Google and hosted by NASA. The contest goal required participants to design and build a highly fuel-efficient aircraft that can fly 200 passenger miles per gallon of fuel at an average speed of 100 miles per hour.

Embry-Riddle’s Eco Eagle operates on a hybrid system, with a Rotax 912 ULS 100 HP engine creating the propulsion needed for takeoff and an electric prototype engine that kicks when the aircraft reaches cruising altitude. The Eco Eagle’s 75-foot wingspan gives it a 50:1 lift-to-drag ratio, which helps it achieve maximum efficiency. One of its biggest challenges is the 200 pounds of batteries it carries to power the electric engine. The battery packs are housed in two troughs in a section of each airframe. Each battery pack is wired via an extensive network to the engine. 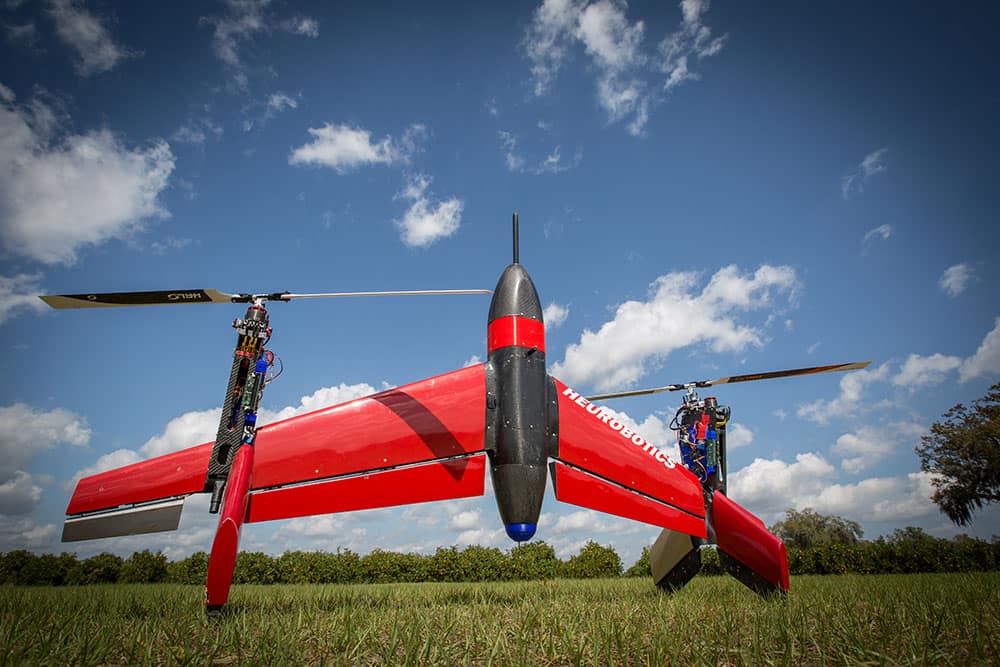 The Mk II is a computer-controlled hybrid flying machine that lifts off vertically like a helicopter, leans to a 90-degree angle and flies horizontally like an airplane. With controls developed via iterative parameter identification, the Mk II  essentially taught itself how to fly. Developed by Embry-Riddle engineers, the Mk II has garnered international research support. It was among the fourth-round winners of industrial research and development funding provided by Space Florida and the Israel Innovation Authority.

The design features a mechanically simple airframe similar to a twin-engine helicopter with fully articulating rotorheads. The Mk II is highly intelligent, stable, and maneuverable, thanks to a mathematical solution that stitches together control algorithms for both aircraft and spacecraft. The vehicle has been flying successfully since 2016, when it first demonstrated the ability to take off vertically, transition to forward horizontal flight, perform turns in forward flight, and transition back to hovering flight before landing vertically. 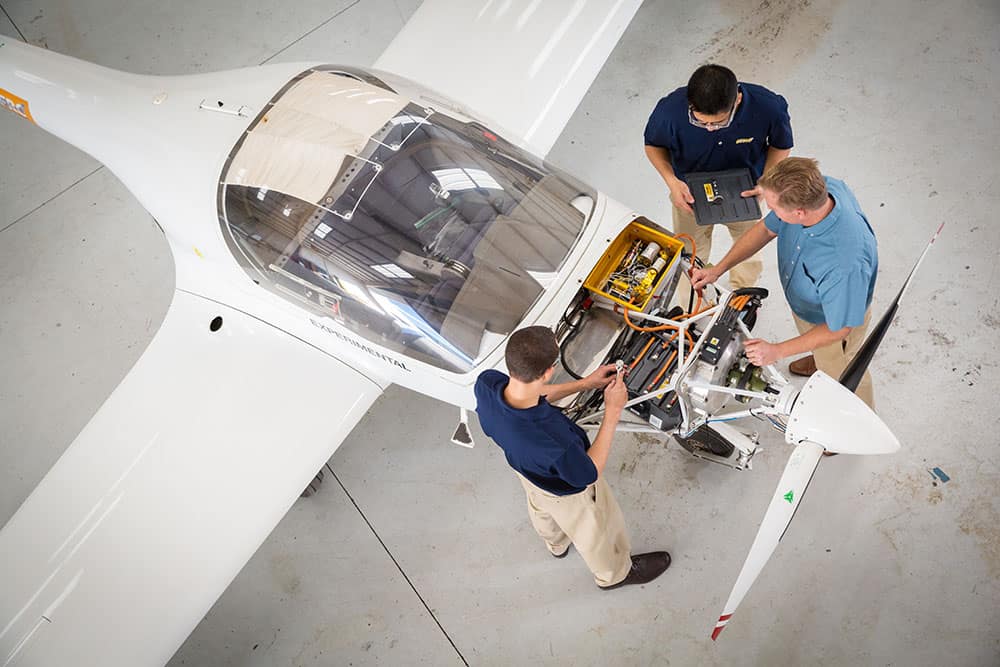 Following on the success of the Eco Eagle, the Eagle Flight Research Center (EFRC) is producing an all-electric version of a Diamond HK 36 motor glider, dubbed the eSpirit of St. Louis. The vehicle’s propeller will be turned by a YASA 750 electric motor powered by in-house developed Li-ion battery packs. The propulsion system also includes an inverter/controller to convert the DC power from the batteries into 3-phase AC. And finally, the system incorporates thermal management (cooling) systems for the motor, inverter, and battery packs.

The project is led by faculty within the EFRC, but the design and physical work is performed by students who volunteer from the Embry-Riddle College of Engineering departments of Aerospace, Mechanical, and Electrical Engineering. This gives students invaluable, hands-on experience working on an actual aerospace project that is on the cutting edge of electrical aircraft propulsion.

The flight profile of the eSpirit aircraft shows that it demands a battery pack with 30 battery modules (15 in series and 2 in parallel) where each module consists of 12 series 7 parallel (12S7P) NCR-18650-GA cells for a total of 2520 cells. The second version (V 2.0) of the battery module consists of two PCBs (printed circuit boards), the power PCB and signal PCB, with spring tabs to connect the battery cell terminals to the bus bars. The battery cells are sandwiched between the two boards inside a phase change material that aimed at cooling and protecting the battery cells.

There is another PCB that has a worker battery management system (BMS). The BMS is a special microcontroller chip specifically designed for cell voltage and temperature monitoring, as well as cell balancing. A prototype module is shown here. These 30 BMS are connected to a manager BMS board using an isolated serial peripheral interface (isoSPI) Bus. In addition, a module-level circuit breaker is set to a max module current of 63 A and individual cell 10 A circuit breakers. The min/max cell voltage is 2.5V/4.2V which leads to a min/max module voltage of 30V/50.4V and a 23.1 Ah. The 30-module pack min/max voltage is 450V/756V and 46.2Ah capacity. 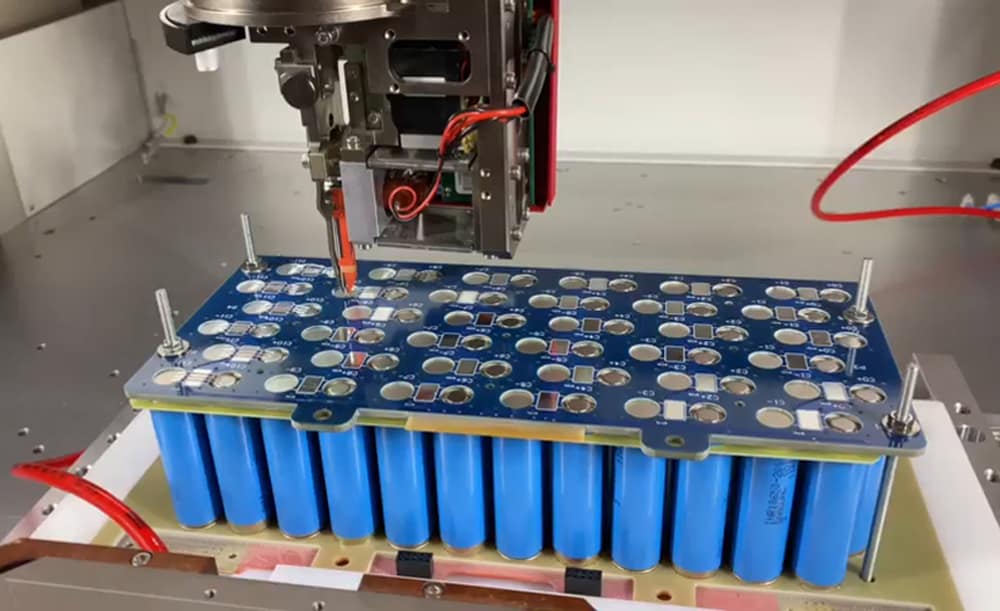 The flight profile of the project requires a battery pack with 9 battery modules in series where each module consists of 12 series 6 parallel (12S6P) Samsung 20S cells. Each battery consists of two PCBs (printed circuit boards), the power PCB and signal PCB, with wire-bonding connection for the cell terminals to the bus bar on the PCBs. The battery cells are bounded to the PCBs for mechanical strength. There is another PCB which has a worker battery management system (BMS). The BMS is a special microcontroller chip specifically designed for cell voltage and temperature monitoring, as well as cell balancing. The worker BMS is customized by the Eagle Flight Research Center to fit in between the power and signal PCBs. This BMS can monitor 3 temperature sensors on the signal PCB. It can be extended to 3 x 32 as needed.

The 9 modules are contained in a box which is submerged in coolant for cooling and safety reasons. There is a junction box on top of the battery box which hosts the manager BMS and the contactors, which are a latching type for safety reasons. There is additional functionality in the junction box, including DC/DC converter for the cooling system. The cells we use in the system are power cells, as we need to provide a power of 110 kW for emergency landing. 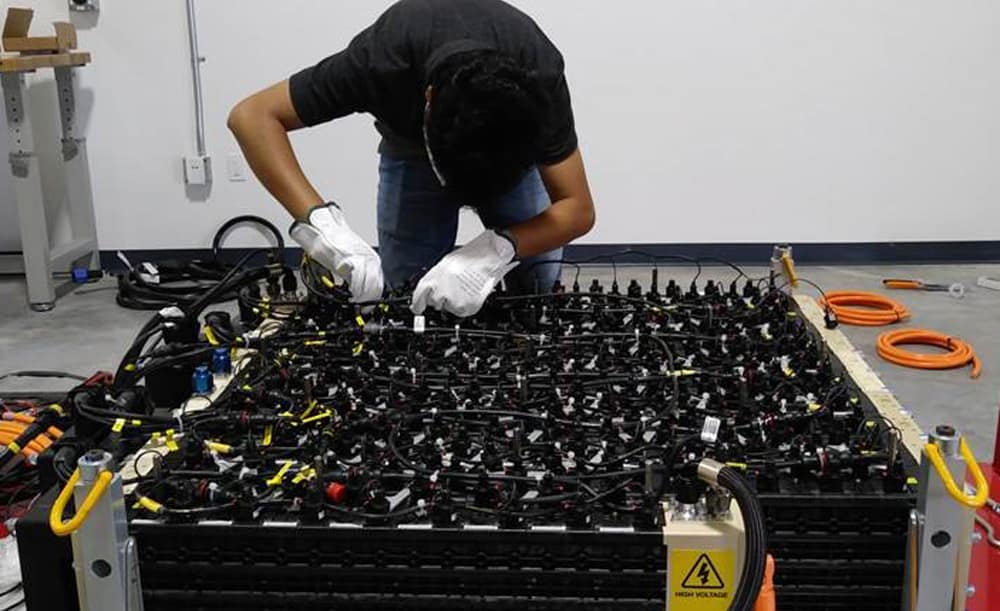 VerdeGo Aero’s Gen 1 battery pack is an unmodified system from the surface traction battery industry. Built using standard 18650 cylindrical lithium-ion energy cells, this pack has a 67 kw-hr capacity at 470 VDC nominal voltage. This system features a unique immersion cooling system that pumps a dielectric fluid through the modules, immersing the cells in the fluid. Besides providing superior management of thermal energy, this dielectric fluid dramatically reduces the potential for cell-to-cell thermal runaway should a single cell experience a runaway event.

This Gen 1 pack is built for the surface market and features BMS and other safety systems that are appropriate for this market. Building on the core immersion cooling concept, VerdeGo is adapting this technology for use in the aerospace market, where it is expected to deliver significant advantages in discharge C-rating, cycle life, and pack safety. 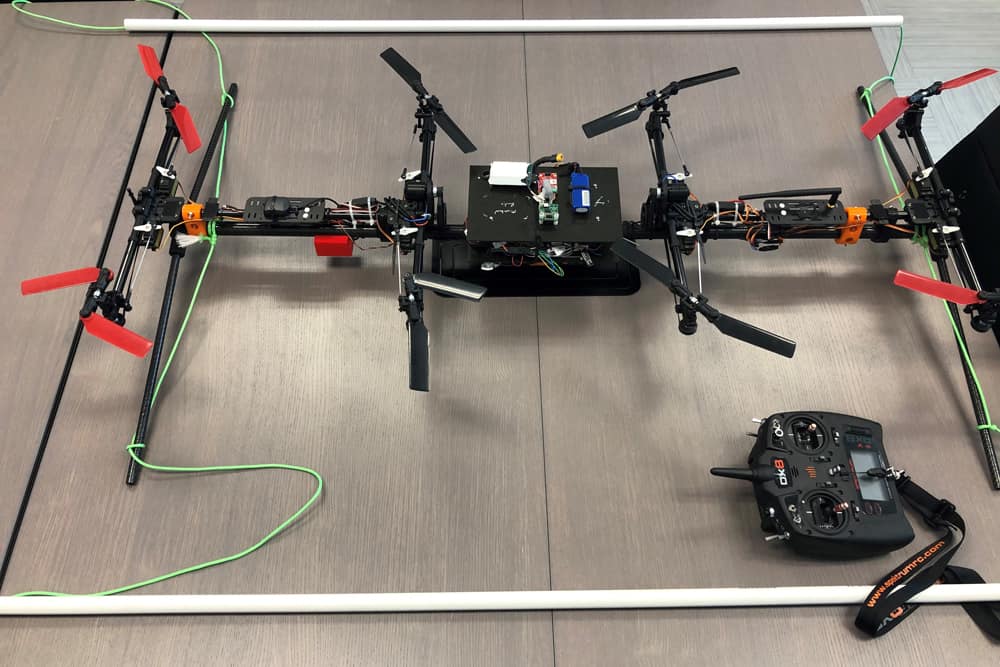 As experts in distributed electric propulsion, VerdeGo Aero has built a flying testbed for developing eVTOL flight controls that utilize an array of variable-pitch propellers. This testbed, a small, eight-rotor drone (octocopter), was built using off-the-shelf hardware components. As vehicle size increases, rpm-based flight controls become less effective as rotational inertia becomes harder to effect as motor and propeller/rotor sizes increase. Although this demonstrator is at a small scale, the control scheme utilizing variable-pitch rotors by design is much more scalable to larger craft. 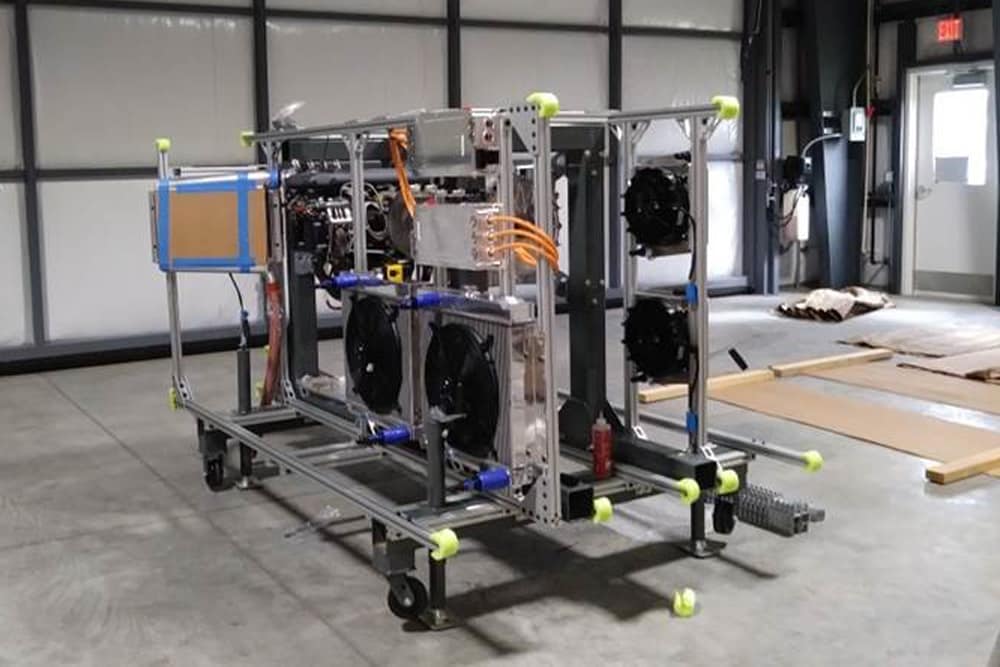 The VerdeGo Aero Iron Bird is a ground based, operational test bed built to demonstrate the diesel hybrid-electric concept. VerdeGo is using the Iron Bird to develop the systems and operational requirements that will drive the design and development of a flightworthy system. More than just a generator set, the Iron Bird also includes a simulator-driven control station that enables real-time, hardware-in-the-loop testing of realistic mission profiles and use-case scenarios for a variety of vehicle and mission types, including eVTOL, eSTOL, and eCTOL.

The Iron Bird will evolve over time. Its first iteration, known “Gen 1” or “V1,” features off-the-shelf systems components that are available now to prove the concept, but are not optimized for weight. As testing progresses, VerdeGo will replace various components to optimize for weight, power consumption, redundancy and reliability. Built around the Continental CD-265, the Iron Bird has a maximum continuous power output around 180 kW, and depending upon the battery pack configuration, a maximum burst power of 500 kW.