This 2,000-square-foot lab is designed to facilitate basic engine and propeller systems.

This lab will introduce students to concepts relating to engine theory of operation, design and construction. The student will become familiar with aircraft engine components, reciprocating engine lubricants and lubrication system operation. The student will utilize the Engine Manufacturer’s Instructions for Continued Airworthiness and Federal Aviation Administration documents when performing maintenance and inspection of the Lycoming, Austro Diesel and Teledyne Continental Powerplants.

This course will also familiarize the student with reciprocating engine fuel metering units and fuel injection systems. Students will become aware of how these units react and compensate for changes in atmospheric conditions and differing engine power requirements. Information on superchargers, turbochargers, induction systems, cooling systems, exhaust systems and ice and rain control systems is presented in depth.

AMS 271 is a required course for the FAR Part 147 Program. It is designed to provide assistance for preparation for an associate degree and/or a bachelor’s degree.

Lab Projects 1-8 require the disassembly of four to 12 Lycoming 0-320 engines depending on the number of students and sections. This requires constant supervision to assure proper procedures are followed to prevent injury to the students or damage to the lab equipment or engines.

Student performs dimension inspection precision measurements to within .0001” of parts as required utilizing Micrometers, Vernier Calipers, Telescoping “T” Gauges, Ball Gauges and Thickness Gauges, and must then determine if parts being measured are serviceable in accordance with the Table of Limits.

After the completion of Practical Projects 1-8, the engines must be reassembled by the students in accordance with the Manufacturer’s Instructions for Continued Airworthiness utilizing the Overhaul Manual, Table of Limits and Service Instructions for Torque Values, which the student records on the engine assembly checklist and must be verified by the Instructor, who then monitors the torquing procedure to prevent damage to the engines.

The Instructor has set up a quality control process in which each step of assembly must be inspected and signed off by the Instructor before the next is started.

Next, the students learn about fuel metering by disassembling and inspecting a Marvel Shebler Carburetor. After learning the five systems of the carburetor, they then perform a dimensional inspection and reassemble the carburetor. The student will remove, replace and rig the carburetor on an engine, perform an operational check and complete a logbook as required by the Federal Aviation Regulations.

In the last two units, the students study Lycoming and Teledyne Continental fuel injection and turbocharging projects by extracting data and identifying systems and components on various engines in accordance with the Manufacturers Instructions for Continued Airworthiness.

The class then moves outside to the AMS Engine Run Test Cells, where they perform engine starting, magneto operational checks and engine power checks as well as emergency checklist familiarizations. 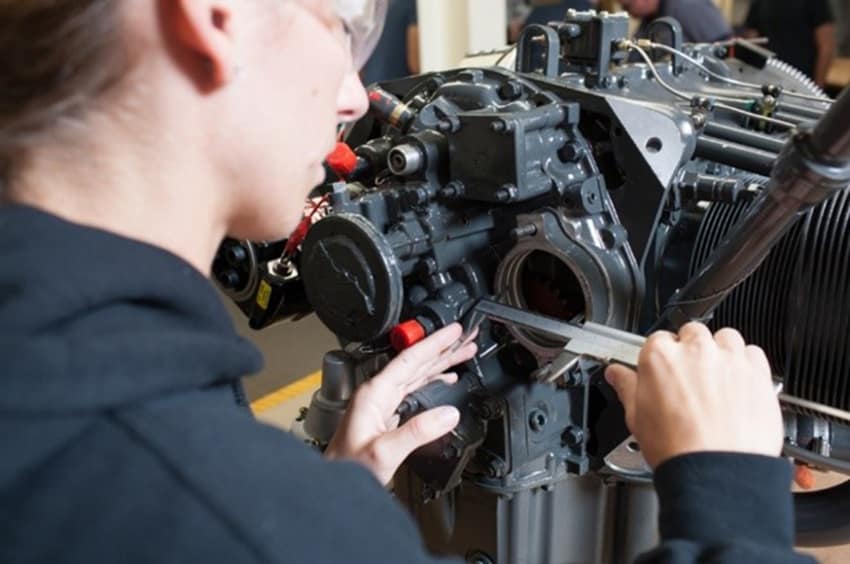